What Types of Snow Blowers are Best for The Lake Tahoe Region? 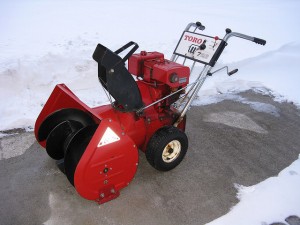 Snow blowers come in a variety of shapes, sizes and power levels.

There are three main types of snow blowers – single stage, two stage and three stage. Each of these types have different subtypes with different features. Let’s start with single stage blowers.

Single stage snow blowers are good for environments with average snowfall and are best used on paved surfaces because the auger actually touches the surface.

Two-stage snow blowers are strictly gas models that are used to move more snow in less time than the single stage. The two stage requires the extra power of a gas engine because the engine must drive both the auger and the second stage impeller which propels the snow out of the shoot. Most models have power driven wheels due to their weight, which reduces user fatigue, and they can be used on a variety of surfaces.

Three stage snow blowers are similar to two stage in both power and weight. Three Stage blowers, however, feature an accelerator action stage that moves snow up to ten times faster than the two stage. They are best suited for applications that require the movement of large amounts of snow in a very short time.

Which Types of Snow blowers are Best for The Lake Tahoe Area?

Nestled between the Sierra Nevada and the Carson range and sitting at an elevation of more than 6,000 feet, the Lake Tahoe region receives an average annual snowfall amount of 125 to 500 inches, depending on the specific area. This is well beyond the average amount seen in the rest of the country.

If you live in the Lake Tahoe region and are in the market for a snow blower, the best type of snow blower for the region and your pocketbook is the two stage. The two stage blower provides the power necessary to get through the large snowfall amounts along with the ability to traverse uneven terrain. If you need snow moved fast, consider a three stage model.

No matter what type of snow bower you own, Greg’s Small Engine Service and Repair specializes in snow blower repair and maintenance in the Lake Tahoe Region. Greg’s Small Engine and Repair offers pick and delivery service 7 days a week. We can come to you, pick up your snow blower, service it and return it to you. Contact us today to get your snowblower serviced before the snow gets bad! r

My snowblower broke down and I decided to call Greg’s Small Engine Repair. Greg drove up to my house in South Lake Tahoe and picked up my snowblower and had it fixed up within a couple days and delivered back to me. His pricing was fair and he called me before doing any fixes. Thank you! END_OF_DOCUMENT_TOKEN_TO_BE_REPLACED

Gregs Small Engines picks up & delivers your Lawn Mower back to you. Excellent Work/Service. END_OF_DOCUMENT_TOKEN_TO_BE_REPLACED

These guys are awesome! I was turned away from every other small engine shop in Reno/Sparks due to the type of engines I had. I need my engines for work so when these guys found out my situation they not only drove from carson city to sparks, they went to Napa and picked up spark plugs form me. Best customer service ever! Customer for life! Thanks guys. END_OF_DOCUMENT_TOKEN_TO_BE_REPLACED

Greg and son run a great business. They provided a a very good ball park estimate when I first called. They were very helpful and honest in helping determine whether the repair would be worth it. They did a great job in repairing the mower for a reasonable cost. I highly recommend them. END_OF_DOCUMENT_TOKEN_TO_BE_REPLACED

“My snow-blower broke down during our heavy Winter this year.  I was distraught and had to find someone to help me get my snow-blower working again.  I found gregsmallengine.com and talked to the owner, Greg.  He called me and let me know what was done to my machine to get it up and running again.  The cost was very reasonable and I am very happy to say it was delivered back to my house.

I am one happy customer and he is a super nice person!” END_OF_DOCUMENT_TOKEN_TO_BE_REPLACED

Greg & James are a great father/son team who provide the BEST in customer service! They just fixed our 25 year old snowblower that had never had a full service before. They picked it up & dropped it off (all part of the price) and it’s running as if it’s brand new. Thanks guys for being so customer-service focused! END_OF_DOCUMENT_TOKEN_TO_BE_REPLACED

Thank You!
Visit our yelp page